MONEY, WEALTH, INFLUENCE CREATE A DEADLY COCKTAIL: "UNDER THE INFLUENCE" BY JOYCE MAYNARD! 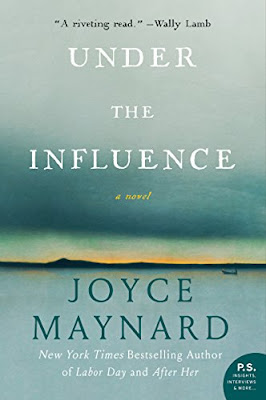 Helen stumbles into the Havilland’s mansion burdened with the great import of the news she carries along with her.  “What is going on?” her friends Ava and Swift Havilland ask, their faces full of concern.  Stop here and freeze the frame.  Will Helen reveal the information she has just discovered or will she keep it to herself? This is a pivotal moment in her life, one that she will forever look back on with regret.  It is also the juncture where Joyce Maynard’s outstanding book “Under the Influence” leaps into action, pulling us inexorably along with it.

“Under the Influence” (2017) is a story that begins slowly as Maynard puts in place each of the elements of suspense which ultimately propel the book forward. Just around a third of the way through, I felt like I couldn’t put the book down and had to read it until the end, even though it took me until 4:00am.

The plot is generally as follows.  Alcohol cost Helen her marriage and custody of her seven-year-old son, Ollie. Once an aspiring art photographer, she now makes ends meet taking portraits of school children and working for a caterer. Recovering from her addiction, she spends lonely evenings checking out profiles on an online dating site. Weekend visits with her son are awkward. He’s drifting away from her, fast.  A fragile Helen has lost custody of her son, Oliver, as a result of a DUI and is only able to see him under limited circumstances.  She is also under intense financial distress because she has to pay off her extremely high outstanding bill to her divorce attorney.

At this point, she enters into a close friendship with the extremely wealthy Ava and Swift Havilland who seem to have endless financial resources and bonhomie.  But as their relationship evolves, it takes on an increasingly dark undertow.

Helen is quickly swept up into the Havilland’s social circle and is able to earn a considerable amount of money from them by taking photographs for them and doing various errands on their behalf.  Eventually Helen meets a somewhat nerdy accountant, Eliott, with whom she falls in love.  But she is terribly disappointed because her new friends dislike him and consider him a boring bean counter.  The central sadness of her life is that her son is becoming more and more alienated from her and she is desperately concerned regarding his wellbeing.  It isn’t long before the Havilland's hint that they might be able to help Helen get custody of her son back.  But before they can do so, Helen discovers that they will only assist her at an extraordinary cost to herself.  As the plot moves inexorably towards the horrific climax of this tale, we become increasingly drawn in and invested in its outcome.

I have to say that I was really appalled by this story most particularly because the end was so unexpected.  I had no way to protect myself from the impact of the climax when it came.  Joyce Maynard did a skillful job of weaving the plot together so it was impossible to predict the outcome before it happened.  I think the scenes she presented in finishing up the story will linger in my mind for months to come, along with accompanying emotions of shock, horror, and grief.  Ultimately, I visualized the final scenes of the story with such intensity, they felt completely real to me and still do.

If I have a criticism, I would say that I did not feel that the motivations of the characters had been fully established and so I did not find some of what happened believable.  However, this was still an outstanding novel that challenged me intellectually and emotionally. I am amazed at how Joyce Maynard is able to make the act of writing appear to be so simple and effortless, even when you know it must have required considerable effort and planning.  There is something about the way Maynard describes people and the way that they interact with one another that is absolutely mesmerizing.  You just lose yourself in her vision.

So why am I writing about the work of Joyce Maynard whose book about her relationship with J.D. Salinger, "At Home in the World", in the eyes of some individuals, propelled her to the status of permanent outsider for the entirety of her career?

I would answer that sometimes my tastes will simply venture forth off the plantation.  For instance, I could spend a considerable amount of time describing the extraordinary facial expressions I get in response to my occasional remark that Steven Spielberg couldn’t direct his way out of a paper bag even if he tried.

When it comes to J.D. Salinger and his book, “The Catcher in the Rye” I have the same situation. To be honest, I never really saw much in that book, which was pretty much his only book.

I mean really.  Now, I understand that we celebrate the work of a Charles Dickens and we admire the mastery of an artist like Jane Austen who wrote multiple books.  But are we seriously going to fall over in admiration of a writer who merely wrote a single book and a few forgettable short stories?  To me, before raising an author to the highest tier of artists, he or she should have produced a considerable body of work which demonstrates their craftsmanship. In my opinion, J.D. Salinger never did that.

As a consequence of these kinds of attitudes, when Joyce Maynard’s scandalous book “At Home in the World” came out, I was not particularly shocked by her decision to speak about her relationship with the so called great man, 35 years her senior.

I grew up in a household where the current literary trends were an ongoing subject of discussion and my mother read the “New York Times Book Review” on a weekly basis. When it came to literary greatness, my own parents did subscribe to the widely held precept that “genius has its privileges” and so when they heard about J.D. Salinger’s pedophile proclivities, they weren’t incredibly disturbed, though they did not think much of it.

On the other hand, to give them credit, they admired Joyce Maynard’s genius as well.  This meant that they felt that she was perfectly within her rights to speak up about what she had experienced in her relationship with J.D. Salinger.  They did not share the widespread indignation and hatred that was directed towards Joyce Maynard, and instead defended her.  When it came to my own memoir, they were the first to appreciate it, even thought it was critical of them and their behavior.  In fact, my father personally took my manuscript to the Rutgers University Press and tried to get it published.

Be that as it may, if we are going to talk about the writer as artist and the development of the artist over a period of time and the establishment of a body of work, rather than look at a one book author like J.D. Salinger, a person we can truly select for a solid example is Joyce Maynard.  In the course of her career, she has written 17 books of both fiction and non-fiction, true crime, and young adult fiction.  All of this work deserves the benefit of a wide audience.  It is the reason why I continue to read her work today and decided to write this book review.

Given my interest, what can I say about Joyce Maynard's background.  Ms. Maynard was born in Durham, New Hampshire to Fredelle and Theodore, a Mom who was a journalist and English teacher, and a father who was a painter and professor at the University of New Hampshire.

Ms. Maynard went to Phillips Exeter Academy, an elite private high school, and was then afforded a full scholarship to Yale University in New Haven, CT.

Joyce Maynard was a precocious writer who began her writing career at the age of 13, possibly because her mother was a frustrated writer herself who considerably pushed her daughter towards a literary career. It was during her freshman year of college that Joyce Maynard connected with J.D. Salinger who initiated a correspondence in response to an article she had published that year in the New York Times Magazine entitled, “An Eighteen Year Old Looks Back on Life.”

Later that year, Maynard abandoned her College career and her scholarship and moved in with J.D. Salinger, only to be tossed out of his life eight months later.  What is interesting about that relationship is that no one, not even Joyce Maynard’s parents who visited her while she was living with Salinger, objected to the relationship.  At the time, as I have said before, Salinger was 53 and Maynard was 18, meaning there was a 35 year age difference between them.

Despite this disastrous and rocky start to her literary career, Joyce Maynard continued on to become a great success.  Hers is an example that we can all follow.  This is what I find particularly fascinating about her and what motivates me to continue to read her work.

As a side note, in reviewing Joyce Maynard’s website, I notice that she conducts regular workshops on writing personal essays and memoirs in a broad range of locations such as California, New Haven, CT, and Guatemala.  She appears to be such a supportive and personable individual that, if I could join in on one of those workshops, I certainly would.  Meanwhile, if you missed the dates for the in person workshops, she also offers online classes at a very inexpensive rate.

A graduate of Columbia University, Nichole Tourtelot began with the DeFiore Agency in 2015.  Apparently, before that she was working as an agent at Kuhn Projects.  David Kuhn originally represented Joyce Maynard for the book “Labor Day.”  Perhaps this is where they met and established a relationship—one thing often leads to another. Tourtelot represents authors in a variety of genre’s, i.e. narrative and prescriptive nonfiction, food, lifestyle, wellness and health, pop culture, history, humor, and memoir.  Currently, she represents bestselling authors Alison Roman, Amy Kauffman, Ben Greenman, and Dr. Venus Nicolino.  Now I do not recognize these folks, but that doesn’t necessarily mean anything.

As a final note, allow me to leave you with this one bit of wisdom from Joyce Maynard.  If you read Maynard’s essays, one of the most significant statements she makes, at least for me, is that you must be true to your own literary vision. In her words, ““A writer must forget about what her parents or anyone else will make of her work.”  If you are unable to do this, you simply cannot succeed as a writer.

If you wish to explore Nicole Tourtelot any further, please go to the following link:

Posted by Elizabeth A. Richter at 1:51 PM