WHAT CAN YOU DO WHEN YOU DON'T EVEN GET "HALF A CHILD"? WILLIAM J. MCGEE ON A FATHER WHO LOVES HIS CHILD! 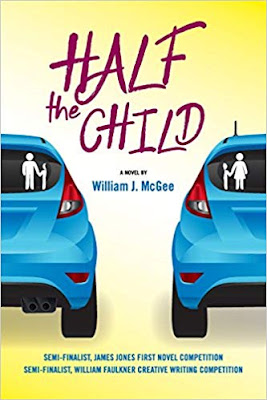 “Half a Child” is an incredibly moving story of a father who tries to maintain his stability and nurture his relationship with his son from the ages of two to five in the aftermath of divorce.  His struggle is conducted in the shadow of a family court system that completely disregards his role as a father.  Remarkably, the court does nothing to safeguard this father's relationship with his son despite the ongoing assault on that relationship via the other parent.  This story moved me deeply to the point where I kept on thinking of the story as a real story, even though it is a completely fictional account.  While Mr. McGee did undergo a very serious divorce of his own, which informs the novel, as he kept on repeating to me while the tears ran down my cheeks, it is indeed fiction.

At the beginning of the book, “Half a Child” by William J. McGee, the main character, Michael Mullen, speculates, “I don’t know that later I will say if I had known all the things I had not known at this time, I would have killed myself…”  As a family court victim myself, I feel that so many of us would make this statement, i.e. that if we had known the suffering and profound pain we had lying ahead of us, we might have killed ourselves right up front rather than endure what we ended up having to go through.  This is the most profound condemnation of the family court system itself, i.e. the fact that it evokes such images of desperation and despair in so many of the people who end up forced to use their services.

The book pursues several themes with which family court victims are familiar.  For instance, right at the start of the book, Mr. Mullen’s ex simply seizes $14,000 from their joint bank account and the money never gets seen again!

However, the most central issue is the Mother’s insistence upon first moving from New York City to Indiana with the child for a full year, and then subsequent to that choosing to move to Israel.  How is Michael Mullen supposed to maintain a relationship with their child if the other parent keeps on moving vast distances away?  Why can't Michael Mullen’s ex wife, a Ph.D. in psychology, obtain work in one of the best job markets in the country for psychologists?  Repeatedly, Mr. Mullen tries to get the family court system to address this issue of relocation in a fair and equitable manner, or even consider that he might just be the better primary parent, and repeatedly the system just gives the mother whatever she wants.

There are mediation sessions, therapy sessions, and hearings, all of which disregard the bottom line truth—that if you can’t ever see your child on a daily basis, you can’t exactly have a decent relationship.  Instead, Michael Mullen ends up being the focus of vicious attempts to inflate minor incidents and reinterpret them as somehow damaging to the child. The most dramatic part of this novel is when Michael Mullen’s ex refuses to return their child for his scheduled time with his Dad.  This leads to international legal action to retrieve the child.  Nonetheless, remarkably enough, the mother still ends up with custody and the father is, for the better part, shut out of the life of his child.

The consequence of this protracted legal battle of four years is the deterioration in Michael Mullen’s physical and mental health, even to the point where he puts lives at risk in his job as an air traffic controller.  In addition, his incompetent attorney drains him and his family of thousands and thousands of dollars.  Still, it is important to note that this is not a grim book. You end up knowing that Michael Mullen, a committed father if there is one, will somehow find a way to making sure he preserves that relationship with his child.   Further, if there is anything I can say, it is that this book is full of insight, some absolutely amusing moments, and intensely moving interactions between father and son.  I also want to give a shout out to Mr. Mullen’s car “Lovey”—talking about personality, the car is a character in its own right.

"Half a Child" is very respectful of both fathers and mothers dealing with the challenges of family court matters.  While it is honest regarding the intensity of the pain involved in a custody matter, it is by no means bitter or mean spirited.  However, I do want to launch one criticism at this book, which is that it promotes the idea that mothers have all the rights in family court at the expense of fathers.  As a long time, family court reform advocate, I can state categorically that the court is absolutely corrupt and vicious towards both genders, and that many speculate that since the establishment of the fatherhood initiative the advantage is solely in the fathers’ side.  This is an issue that requires further exploration.

William McGee is a native of New York City and obtained an MFA in fiction from Columbia University.  He has taught creative writing within a number of different contexts, and is the author of the book “Attention All Passengers” an expose of the airline industry.  At one point he was Editor-in-Chief of “Consumer Reports Travel Letter”.  He was formerly in the U.S. Air Force Auxiliary and has worked in airline flight operations.  He is currently living in CT and being a Dad is an extremely important part of his life.

Like many people who have worked to create an outstanding piece of literary work which challenges a tough subject, Mr. McGee was unable to obtain a traditional publishing company to take on this book. As a consequence, it has been self published with the assistance of some outstanding professionals.  For instance, the striking cover design of two cars each with a parent and “half the child” is by Eric Hoffsten.  While this means that William McGee won’t have the top down traditional support of the publishing industry, I am impressed with how Mr. McGee has more than made up for this with his outstanding writing as well as his willingness to reach out to his audience wherever they are available—at bookstores, online, and at libraries.  I believe he can count on the grassroots to understand, appreciate and embrace his work, and I would encourage everyone to be a part of that movement.