SHOT TO PIECES: THE EXISTENCE OF PITY, BY JEANNIE ZOKAN! 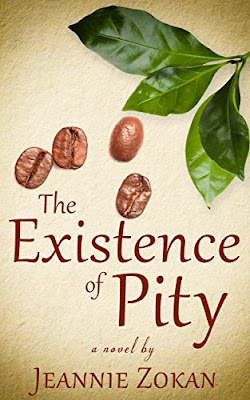 "When I found out Aaron had been shot, I fainted for the first time in my life."  And oh my God, I had to read further to find out what happened! Next the author states, "How could one summer go so wrong?" Now I am really hooked!  So begins the story "The Existence of Pity" by Jeannie Zokan.

"The Existence of Pity" is a touching and heart wrenching coming of age story set in Columbia, South America. Growing up in the city of Cali, Columbia during the 1970s, sixteen-year-old Josie Wales has lived a fairly sheltered life as the daughter of Baptist missionaries, until in one fateful summer, everything changes. Secrets that had long been boiling away under the surface of her family life break out into the open with devastating consequences.


Meanwhile, she finds herself drawn towards three very attractive boys: the mysterious and popular Alejandro, Martin, who is so easy to confide in, and then Tom who is goofy but terribly sexy at the same time. Which boy should she choose? Not only that, Josie is breaking out--breaking out from under her older brother, Aaron's, far reaching shadow, and breaking out of her parent's insistence upon limiting her explorations into other faiths.

Josie will do anything to save her family, but when does the time come when she will be required to put her own needs first. Josie always believed that her family made decisions based upon their religious commitments; now she must come to terms with the fact that practical imperatives require them all to make ethical compromises. This all takes place within the backdrop of a culture where all is not as it seems and lurking danger hides behind every shadow.

I heard about the book "The Existence of Pity" when the author, Jeannie Zokan, sent me a message about it on Facebook.  I think we are both members of a Facebook booklovers group and that's how she noticed my name. Since I am fairly clueless in my use of Facebook, it took me a month and a half before I saw the message!  Here I am trying to use social media to connect with people more and learn new information and then I am so klutzy about it.  I feel so embarassed!  Still, I did find out about this book, and I have not regretted it.  I am always up for another great book to read.

Let me tell you a little something about Jeannie Zokan from the blurb on the back of her book. She grew up in Columbia, South America and went to the American School there. Afterwards she studied Library Science at Baylor University and subsequently went to George Washington University in Washington, D.C.  She currently lives in Florida where she has written stories for local newspapers.

Apparently, she lives only ten minutes from the beach.  Oh my God! Did she have to say that?  Ahhhh!  We just had a snow storm here in New England with 18 inches of snow dumped on my front door step.  There should be a law about writers boasting about the lovely places where they live! Anyway, in this tropical paradise, Ms. Zokan lives with her husband, teenage children, and a modest menagerie of pets!

For those who are interested, Jeannie Zokan has a really great blog called "Jeannie Zokan:  A Writer's Cup" which is full of really tantalizing commentary and observations. I would highly recommend it for an additional bit of good reading. Ms. Zokan also has news and information about her new book on this website, including a very nicely produced book trailer.  The link to the website is as follows:

Please note,  Jeannie Zokan provides some pictures and commentary on the Cathedral called "La Ermita" in Columbia which plays a major role in her novel.  So just by going on this website you get some of the backdrop of the novel and a sense of the thinking that went into it.

Also, take a look at Jeannie Zokan's author website at the link below:

"The Existence of Pity" is published by Red Adept Publishing which, as I noted in an earlier blog review, also published another outstanding author, Kate Moretti.  This publishing company specializes in high quality, intelligent fiction for readers who appreciate fresh, inventive, and innovative fiction. Jeannie's book came out in September 2016, so it is just beginning its journey.

I am not a big fan of the cover art.  This is a psychological suspense novel about a family in turmoil, so what is the connection to coffee beans?  Is El Jefe going to show up in the middle of it?

I will give Red Adept credit, though.  They have informed us of who created the cover, i.e. Streetlight Graphics which is located at the following link:

So often publishing companies fail to acknowledge the contributions of cover designers and I think that is regrettable because, from what I gather, these designs play a major role in regard to sales.  And while I am a bit critical, I will say the cover of "The Existence of Pity" is quite distinctive and will stand out to readers.

For an additional perspective on this book, there is another very interesting review of "The Existence of Pity" at The Coffee Pot Review at the following link:


Overall, "The Existence of Pity" was an excellent book that kept me engaged from beginning to end. Once I started reading it, I really couldn't put it down until I was finished. I thought it did an excellent job of portraying the complexity of the relationship between missionaries and their families as they interact with and try to convert people among whom they live intimately yet who are of a different race, language, and culture. Is there the possibility of mutual respect and regard? Yes or no. You decide.

If there is one criticism I have it is that I do not believe the son, Aaron's, story arrives at a complete closure. If he was shot once, what prevents him from being shot again? Of course, sometimes unanswered questions can be very thought provoking and evocative, so maybe it's a good thing. I'd love for you folks to comment on that point, if you have a moment.

For more information on this book, please click at the link below: