MR. PENUMBRA'S 24-HOUR BOOKSTORE: WHAT ADVENTURES HAVE WE GOING ON HERE! 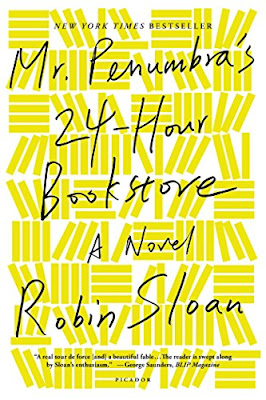 "I am holding on for dear life, one hand on the ladder, the other on the lip of a shelf, fingers pressed white.  My eyes trace a line above my knuckles, searching the spines--and there, I spot it.  The book I'm looking for."  So begins Mr Penumbra's 24-Hour Bookstore: A Novel by Robin Sloan.  Originally published as a 6000 word short story on his website and kindle store, it eventually became the book that it is now.

I chose to read this book because I love books and it's about a bookstore. Right? Why else. And let me tell you, novels about bookstores are a rich vein of endeavor. I feel as though anyone who has ever loved a book has tried one, and that is a truth reflected by my investigation of the subject on Amazon.  Let me just list a few I found on Amazon when I did a search among the books using the search term "bookstore."  They are as follows:

These are just a few of the ones that I found. There are many more. So novels set in bookstores are an extremely popular subject and I thought the time had come for me to sample just this one.

The second area of interest that struck me in connection to this novel is the name: Mr. Penumbra. Penumbra just sounds good rolling of your tongue. In addition, there are several different meanings to the word "Penumbra" that add to the elusive meaning of this book. They are as follows:

1.  A partial shadow, as in an eclipse, between regions of complete shadow and complete illumination.

2. The diffuse outer part of a sunspot.
3.  An area in which something exists to a lesser or uncertain degree.
4.  An outlying surrounding region; a periphery.
5.  The partly lighted area surrounding the complete shadow (umbra) of a body, as the moon, during an eclipse.
6.  The less dark region surrounding the dark central area of a sunspot.
7.  A vague, indefinite, or borderline area.
8.  A partial shadow between regions of full shadow (the umbra) and full illumination, especially as cast by Earth, the Moon, or another body during an eclipse. During a partial lunar eclipse, a portion of the Moon's disk remains within the penumbra of Earth's shadow while the rest is darkened by the umbra.
9.  The grayish outer part of a sunspot.
10. The definition of a penumbra is the lighted area around the shadow of a planet or moon during an eclipse.
11.  A partially shaded area around the edges of a shadow, especially an eclipse.
12.  (astronomy) A region around the edge of a sunspot, darker than the sun's surface but lighter than the middle of the sunspot.
13.  (figuratively) An area of uncertainly or intermediacy between two mutually exclusive states or categories.
14.  (figuratively) An area that lies on the edge of something; a fringe.
15.  Something related to, connected to, and implied by, the existence of something else that is necessary for the second thing to be full and complete in its essential aspects.
16. (medicine) (in "ischaemic penumbra", after a stroke) A region of the brain that has lost only some of its blood supply, and retains structural integrity but has lost function.

Check out this original list at the following link:

Mr. Penumbra, whose first name I will not give you because that would send you along an entirely new vein of investigation aside from being a bit of a spoiler, plays a mentor role in the book. As you read the book, if you keep in mind each of these definitions of the word "penumbra" above it adds to the shadings of personality and to the depth of the character himself. Mr. Penumbra's 24-Hour Bookstore is ultimately about the love of learning, the love of books, and the journey into the heart of the self, and in these endeavors the leadership, the mentors, the colleagues, all the way down to those just beginning have deep and meaningful relationships. At the center of that is the "book" in all its extraordinary, wondrous beauty.

The book was published on October 2, 2012 by Farrar, Straus & Giroux and sold by McMillan.  It is listed under visionary and metaphysical books.  The core of the story is as follows.  Clay Jannon lost his job as a graphic artist during the great recession of 2007-2008 and can't seem to find another.  Everyone else seems to be forging ahead with their careers.  One night when he is walking around San Francisco he sees a help wanted sign for a night clerk in a 24-hour bookstore.  He immediately applies and gets the job.

Clay is one of three people who takes care of a very odd bunch of customers who come to the bookstore at all times of the day or night.  HIs job is to maintain a logbook where he is supposed to write a description of each customer, what they were wearing, what they said, and what book they left with.  After a while, Clay realizes that there is a specific pattern to how the customers are taking out these volumes of books and he taps some of his more technologically inclined friends to figure out the code.

Thus, his adventure begins, combining events and scholars of hundreds of years ago into the present, traveling from the West coast to the East coast and back again, and, in the process, finding his identity.  Along the way, he encounters love and discovers new meanings for the term friendship.  If there is one drawback to this book, I would say, it's that it did appear to me to be a quiet, subtle, yet persistent advertisement for the Google Corporation.  Its best piece of wisdom, which we are left with--yes, I know, bit of a spoiler but I can't help it--is: "There is no immortality that is not built on friendship and work done with care.  All the secrets in the world worth knowing are hiding in plain sight."  I liked that.

Anyway, moving along to our author, Robin Sloan.  He is one reserved, tight lipped bugger.  He has a one line bio, "Robin Sloan grew up in Michigan and now splits his time between San Francisco and the Internet."  That's pretty much it.  No acknowledgements for anyone, no book group questions or activities, no nothing.  I guess if your first book becomes a New York Times Bestseller, you don't have to be bothered with explaining yourself.  I would add, a bestseller "of note" because a lot of silly books end up on the bestseller list by gaming the system, and those don't really count.  From what I can see, Robin Sloan hit a home run fair and square, so he doesn't have to do anything but have his picture taken and smile slyly.

Luckily, we have wikipedia which provided more information. Robin Sloan's Mom was a home economics teacher while his Dad was an appliance salesman.  He attended Michigan State University where he co-founded the literary magazine "Oats" and he also contributed to "The State News" a student newspaper.  After graduating in 2002 with a degree in Economics, he moved to Florida where he had a fellowship at the Poynter Institute.  In 2003, he founded the SnarkMarket blog with friends, and in 2004 he moved to San Francisco and began to work at Current TV as a media strategist/interactive producer. For two years, he also worked for Twitter. To publish his first novella, Annabel Scheme, Sloan crowdfunded his work on Kickstarter. He was successful enough to quit his job and work on the project full time.  Currently, Robin Sloan lives with his partner, Kathryn Tomajan, and together they produce olive oil under the Fat Gold Brand.  As far as I could see, Sloan does not have a literary agent, which means he pretty much handles all his own business matters.  That is pretty unusual, but not impossible to do, I suppose.

That's pretty much it then.  Mr. Penumbra's 24-Hour Bookstore is truly a fun book to read.  I can't say I understood all of the abracadabra, but then again, who needs to look that closely when you are going on a fun ride.  The language is simple, direct, and accessible and the chapters short and sweet.  What more could you want.  Definitely get this book, read it, and enjoy.  And if you like it, in 2018, Mr. Sloan wrote another book entitled Sourdough,or, Lois and Her Adventures in the Underground Market: A Novel.  I'm sure that book is worth reading as well.  Also, his speculative short story "The Conspiracy Museum" was published in "The Atlantic" in May 2020.

Posted by Elizabeth A. Richter at 6:02 PM