SPOOKY, SPOOKY SPOOKY: "THE GIRL BEFORE" BY JP DELANEY! 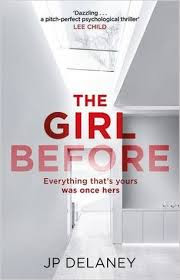 I found "The Girl Before" by JP Delaney among a stack of popular books in a souvenir shop at Dublin Airport.  It looked very intriguing and caught my eye right away.

The book wickedly had a sticker on it declaring the price to be 18.00 Euros, but as soon as I'd purchased it and was sitting on the plane, I pulled off the sticker and found it was originally priced at 12.00 Euros.  Oh, really cheating, is all I have to say.  Buy 1 and get 1 at half price said a round, red sticker on the front, but you are already paying more than you should.  By the time you pay for two books overpriced at 18.00 Euros when they should cost 12.00 Euros, you already paid full price for both.

As I said, definitely cheating.  I think I kind of knew that, but I bought the book anyway because I wanted a really absorbing thriller, and I must say I wasn't disappointed.  This book kept me hooked all the way through to the end, at which point, I will admit, I'm a bad girl and skipped ahead to find out who was the killer.

The cover design responsible for sucking me in like this was done by Andrew Smith, a surprisingly young graphic designer based in London who works on a consultant basis for a broad range of publishing companies.  He originally worked for Penguin books as their Deputy Art Director until he went freelance in 2012.  All I can say is too bad for them losing such a great talent.  He can be found at his website which is located at the following link:

The book "The Girl Before" is more about a house--One Folgate Street--than about the characters who revolve around it.  The house seizes control of the book and places itself front and center right from the start.  As soon as I began reading this book, I began to hear the voice of "Rebecca" by Daphne Du Maurier saying, "Last night I dreamt I went to Manderly again."

This is a novel where the estate, the mansion, the house, the location is just as much of an important character as any other character in the novel.

The house was built in an extremely minimalist style according to the extraordinary specifications of the ultra talented architect, Edward Monkford.  It is a house where anyone who agrees to live there has to fill out a multi page questionnaire and submit to an interview as well as adhere to multiple rules and regulations.  The house is practically alive, checking up on the protagonists' health and well being, following them around and asking them questions, monitoring and videotaping them.  It is a house that shapes behavior, that promotes certain values, and encourages a particular life style which its architect considers healthful and beneficial.

And those chosen to live in this extraordinary, world renowned house do not have to pay that much for the privilege.  What is there not to like?  Well, for one thing, the fact that the house spookily appears to operate independently, and also the fact that an earlier tenant died on the premises under very mysterious circumstances.

As the story unfolds, the reader comes to understand that every woman, and it is a woman, never a man, the architect has chosen to move into One Folgate Street looks alike. Specifically, each woman looks strikingly similar to Mr. Monkford's first wife who died along with his young son, Max, when the house was just beginning to be built.

The story itself is told from the perspective of Jane who lives in the present, and an earlier tenant, Emma, who died in the house in a fall down the stairs.

This book attempts to answer the question:  Was Emma murdered or was she merely the tragic victim of an accident?

Read and find out!

It is worth noting that the name JP Delaney is a pseudonym for the Adman Tony Strong who was born in 1962 in Uganda and brought up in the United Kingdom. 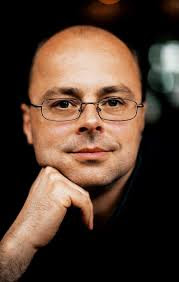 According to his Goodreads blurb, "He read English at Oxford under the playwright and poet Francis Warner and then went on to work as an advertising copywriter at Ogilvy and Mather, an agency which had already bred writers such as Salman Rushdie and Fay Weldon." He won a BAFTA award for a public service campaign trying to stop people from engaging in solvent abuse. He is now working for Abbot Mead Vickers.

In addition, he has written four other mystery novels published in his own name and has also written under a bunch of other pseudonyms including that of Anthony Capella. The book has already been optioned for a movie which will be produced by Ron Howard for Universal Pictures. I have no doubt it will be a strong, successful picture with such a great plot.

Tony Strong (JP Delaney) is represented by Caradoc King. According to his website, Mr. King "started as an agent at A. P. Watt Ltd in 1976 having worked previously as a Senior Editor at Penguin. He became a director of A. P. Watt in 1981 and Chairman and joint Managing Director in 1992 until its sale to United Agents in 2012. At United he continues to represent many authors who became clients early in his career– Philip Pullman, Quentin Blake, Michael Holroyd, Jancis Robinson, Graham Swift, John Lanchester, Philip Kerr, Patrick Gales, Helen Dunmore", etc.


It is my impression from the comments that Mr. Strong made in his acknowledgements that the book was merely a twinkle in his eye when it was accepted for publication.  I guess that you can begin like that if you have achieved the kind of success that Mr. Strong has achieved, and the successful outcome of this book's publication confirms it was the right decision.

In general, this book is notable for its mysterious, enigmatic, magnetic Byronic male lead, the architect of One Fulgate Street, Mr. Edward Monkford, whose more perverse sexual proclivities begin to emerge during the course of the story.  I guess the latter makes him a more modern version of Heathcliffe.

While I can say unequivocally that this book is a great read, I will caution you that the characters are a tad cliched and two dimensional and others who have read the book say they can barely remember the book a month or so after reading it. Still, these are really quibbles.  The bottom line is that this book is a great ride, completely absorbing, and a real nail biter right to the end.
Posted by Elizabeth A. Richter at 1:23 AM