NOW YOU SEE IT, NOW YOU DON'T! MARY KUBICA'S "EVERY LAST LIE!" 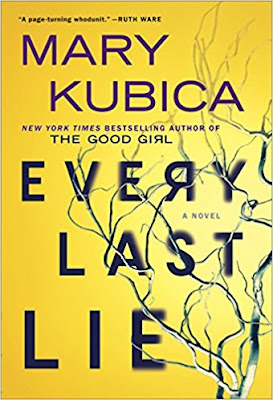 I ended up deciding to read "Every Last Lie" by Mary Kubica because, during the last few minutes of Book Expo 2017, the Harlequin representative gave me a copy of the book out of the goodness of her heart, even though it wasn't actually time for a giveaway.  The world is full of mean people, but when someone does something nice, you've got to celebrate that.

I ended up with tons of books after attending both Book Expo 2017 and Book.con 2017, some of them clearly going to be extremely fun reads and others rather more marginal.  I am a very busy person and I don't often have a chance to just sit down and read, so I have to be very careful what I choose. However, as a result of this special experience with the Harlequin rep, the first book I am going to be talking about is this book.

So!  What is this book about?  Here is a quick overview: Clara Solberg is waiting for her beloved husband, Nick, to return home for dinner with the fast food he'd promised. He is on his way home from taking their 4 year old daughter, Maisie, to ballet class. Clara is also the mother of a newborn son named Felix who often keeps her up at night, which is why she remained home this time and let her husband take their daughter to lessons.  As the clock ticks by, there is no sign of Nick and she begins to get impatient.

Then there is a knock at the door.  It is the police.

Apparently, on his way home, Clara's husband accelerated his car right into a tree. He was instantly killed, while their daughter was miraculously left unharmed. As Clara reels in the aftermath of this tragedy, Maisie begins to have nightmares about a "bad, bad man" who apparently followed them in a black car just before the accident.

At the bottom of her chest of drawers, Clara finds the receipt from an expensive piece of jewelry her husband purchased just before his death. Not long after, she also finds out that he had just recently cancelled his life insurance.

Was he having an affair?

Was he involved in something dangerous--perhaps a Mafia connection--that led to his death?

Clara becomes convinced that her husband's death was no accident, and she is determined to conduct her own investigation. In the end, the truth is far more extraordinary than she could have imagined.

Was Nick a criminal? Was he a philanderer and a cheat?

Read, and find out!

Told from the alternating perspective of Nick and Clara respectively, detailing what happened in the days leading up to and after the deadly accident, the book is extremely suspenseful; my eyes kept on skittering ahead, trying to get advanced notice of what was going to happen. Ultimately, I lost quite a bit of sleep on this book because I couldn't go to bed until I found out what happened in the end.

"Every Last Lie" is the fourth in a series of haunting, chilling, hair raising suspense novels by Mary Kubica.

For a brief bio, Mary Kubica was a high school history teacher in a previous life. She received her B.A. degree from Miami University in Oxford, Ohio, in History and American Literature. Currently, she lives outside of Chicago with her husband and two children. Ms. Kubica is a New York Times and USA Today best selling author.  She has received numerous awards including the Strand Critics Nomination for Best First Novel for "The Good Girl" and she was a nominee in the Goodreads Choice Awards in Debut Goodreads Author and in Mystery & Thriller for 2014.

According to the bio on her author page, "Mary has been described as “a writer of vice-like control,” (Chicago Tribune) and her novels have been praised as “hypnotic” (People) and “thrilling and illuminating” (Los Angeles Times)."

Mary Kubica is represented by Rachael Dillon Fried of Sanford J. Greenburger Associates. Sanford J. Greenburger Associates was originally founded in 1932 by Sanford and Ingrid Greenburger. What they did was represent European authors and publishers in the United States. In this regard, they represented Franz Kafka (one of my favorite authors), Simone de Beauvoir "The Second Sex", and Antoine de Saint-Exupery. In 1972, their son, Francis, took over the firm and turned it into more of an agents' collaborative. At this time they have represented quite a number of leading literary lights such as James Patterson, Nicholas Sparks, Dave Eggers, Dr. Daniel Amen, Dan Brown, Tim Federle, Robin Preis Glasser, etc. etc. etc.

I looked in vain for the name of the book cover illustrator. Still, I think it is worth noting that the book cover is beautifully done. It is a vibrant yellow color that is alternately darker and lighter. The R in the word "Every" in the title is reversed, which only hits your subconscious mind and works its way to the conscious mind as you read the novel. You look at the title and at first you know just glancing at it that something is wrong. Then as you continue to read and that reversed R keeps niggling at your mind, you just have to keep reading and digging to find out what, what went wrong!

The twisted, distorted tree limbs that entangle the author name and title seem representative of the twisted, distorted situations the protagonists in the novel find themselves in. So not only does the narrative tell us a tale, the cover tells us a tale as well, and we are overwhelmed with eagerness to find out what it is.

So unnamed illustrator of the cover, good job!

I don't have much more to say here except with Mary Kubica you are always guaranteed a great read. Her sensitive, insightful observations draw you right into the narrative.  What is more, you feel every nuance of the protagonists' emotions as they twist and turn and try to find their way out the desperate and unbearable circumstances they find themselves in. Your heart breaks for each of them in turn as they struggle with their demons.

In the end, we are left with the question: how well can we or do we know the people closest to us--our spouses, our children, our parents? These are the kinds of complex, ingrained difficulties that Mary Kubica typically grapples with in her books, which inevitably leave us begging for more.

One final word for those of you who were wondering, the last comment from Mary Kubica's bio on her website is, "She is currently working on her next novel." Well, we certainly hope so!
Posted by Elizabeth A. Richter at 3:22 PM