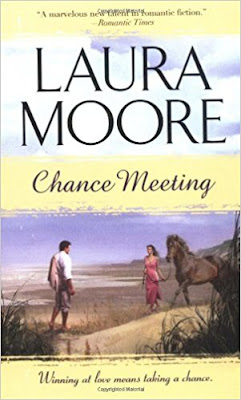 I have recently been venturing into the area of romance literature, which is new for me. I did read these kinds of books as a young teenager. Upon reflection, the names Barbara Cartland, Kathleen Woodiwiss, and Georgette Heyer come to mind. I know, that dates me considerably when it comes to most of you. I do believe that these were the names of some of the writers who invented the romance novel as it exists today.

There is a general sense of disregard for the romance novel and the people who read them.  At least, I certainly get that impression when I go to the information desk with inquiries regarding specific romance books.  However, romance books readers are some of the most dedicated book fans I know. Personally, I believe that the romance novel remains a complex and legitimate form of literary art, though neglected by the mainstream literary world. This is why I decided to read, as my next choice for a blog review, the book "Chance Meeting", the second book written by contemporary romance novelist, Laura Moore. To be more precise, I decided to read this novel in its German translation.

I do this, by the way, every once in a while for practice in my German language skills. If I didn't do this occasionally, I'd totally forget my German, and then what would have been the point of studying it for so many years in high school and college!

The story in "Chance Meeting" is very intriguing.  Teenager Ty Channing is the daughter of a rich real estate magnate in New York.  More than anything else she loves horseback riding, and even more than that she is head over heels in love with the Olympic horseback rider, Steven Stannard.  She hopes she will one day be as good a rider as he is. However, not long after they met at a "Chance Meeting", Ty had a devastating riding accident and her father prohibits her from riding again.  She is sent away to a posh finishing school in Switzerland and her beloved thoroughbred, Charisma, sold.

Meanwhile, as the years go by, Steven Stannard now the owner of a horseback riding stable for the rich and famous, now finds himself plagued with scandal and on the verge of bankruptcy.  Ty has become a strikingly beautiful woman and she is prepared to do what she can financially to save the stable and hold off the developers who want to purchase it, starting with her father.  But will Steve Stannard be able to overcome his pride and accept her help, or her deeply felt love?  Read the book and find out!

I have to say that I really enjoyed this book tremendously.  I felt that I was in the hands of an expert, highly skilled storyteller.  Laura Moore took a considerable amount of time to develop her characters so that we could fully empathize with their struggles and challenges.  I was fully engaged in the narrative and found the experience of living in the world she created highly addictive.  With writers like Laura Moore, it is clear to me why romance fiction fans are so enthusiastic about their favorite authors. The care and attention to detail, particularly in terms of recreating the world of competitive equestrian sports, I found particularly impressive.  The sexual tension between the main characters was palpable and sizzling, but at no time offensive or inappropriate. Overall, I would highly recommend this book to readers because it delivers on every level.

From the beginning, Laura Moore has had the attention of some major publishers. As I've stated, in English, the book was entitled (or Die Originalausgabe was) "Chance Meeting, and published in 2001 by Pocket Books, a division of Simon and Schuster. In 2003, the German publishing company (Verlag), Wilhelm Heyne, then published the book.

The German version is called "Ein Versprechen im Wind" or "A Promise in the Wind." I think the second title actually makes more sense, because the book is about the promise of relationships, the promise of anticipation, the promise of great potential unfurling.

Nele Schutz Design created the book cover design or the "Umschlagillustration and Umschlaggestaltung".  I believe Heyne's German cover of the book uses the colors and fonts for a series of books like this, so those parts of the cover design of the book aren't unique. However, the picture of the horse galloping forward on the front cover is very powerful and striking.  I also like the prominence that the artists in the German version gave to the authors name, directly front and center near the top of the book.

This is in contrast to the English version of the book which pictures Ty and Steve facing one another at a distance, with Ty leading a horse by the reins.  Somehow, there is much less energy in the cover design of the English version.

As a matter of curiosity, I did take a look at the other cover designs for Laura Moore's subsequent books.  For the better part, after "Chance Meeting" Ms. Moore's covers generally feature a picture of a sexy cowboy wearing a cowboy hat with his chest suitably bared.  They are rather less subtle, and seem cheaper than the cover of "Chance Meeting."  Perhaps this is the difference between an early book and a late book--I'm not sure.

"Chance Meeting" was translated into the German by Birgit Groll.  I tried to find out who she is, but was unable to.  I suspect it is hard to locate a German scholar on the English internet.

For those of you who are interested in the experience of reading in a foreign language, German is a very poetic language when spoken by the poets.  The other thing German does, which makes me laugh, is create words based on description which results in megawords that take up a whole line.  For instance,  a word like: thewomanwhoworksintheinsuranceoffice. Sometimes, their words are reputed to start at the left and end at the right; sentences are reputed to start at the top of the page and end at the bottom.  Perhaps that is an exaggeration.  I will say that in my experience German words tend to be very descriptive and state concretely what it is the object is or does.

The other thing that German does that gives me a laugh every time is that it tends to pile up the verbs at the end of the sentence.  So a sentence like, "He could have walked through the garden." translates into "He through the Garden walked could have." And the more literary a text is, the longer the sentences are.  Then German's capitalize all their nouns just to make reading ride more bumpy!

In many regards the way a language is structured reflects the culture.  German is an extremely polite and deferential culture, so a greeting to a superior would be like, "How do you do, Very Honored Master Doctor Sir."

In other words, it is a culture that honors hierarchy and authority, so your superiors are worthy of all sorts of superlatives.  The verbs come all together because when Germans take action, they take action with everything they've got. Yet Germans are sensitive about every detail of everything around them, and highly gifted intellectually, and so you get words that describe those details, or reflect the nature of what the item is.  It can be both ethereally abstract and harshly concrete.  All of this I appreciated experiencing when I read the German version of this story.

Laura Moore, the author herself, by the way, according to the back cover is a "a fabelhafte neue Autorin" or a fabulous new author, as stated by 'The Miami Herald." Of course, in 2001, she might have been new--"Chance Meeting" was her second novel, but in 2017, she is now the experienced and highly regarded author of eleven additional books.

She is no longer with Simon & Schuster and her more recent books have been published by Ballantine Press.

On her webside, she has a short bio stating the following, "I was born in New York City and grew up there and in Western Massachusetts. I received my undergraduate degree and my M.A. in art history. Over the years I've worked as a lecturer at the Metropolitan Museum of Art and the Art Institute of Chicago and have taught art, art history, French, and English. A lifelong horse lover, I’ve ridden competitively and worked as a stable groom and exerciser.   My family and I now live in Rhode Island"

Also, she is married and has two children, or as it states in the book, "Sie lebt zusammen mit ihrem Mann und ihren beiden Kindern."

Further, she states, "When I’m not in front of my computer working on a new story, I’m generally to be found outdoors either riding, swimming, digging in my garden, or walking with my black lab."

Ms. Moore has been a Golden Quill Contest Winner and a Night Owl Top Pick.  She also received the Gayle Wilson Award of Excellence.

If you want to explore more about Laura Moore, she has a website at the following link:

I wish I could say more, that there was additional information out there somewhere on Laura Moore, but there really isn't.  I could find anything on Kirkus Reviews or any other literary platform, and I wasn't able to find anything on Youtube.  This is probably a combination of Ms. Moore's modesty and the fact that romance novels appear to be second class citizens in the book world. For instance, Laura Moore's books are not available to purchase at the Barnes & Noble bookstore near where I live.

Still, she has very healthy reviews on Amazon which I think is a very good sign.  I'm wondering whether some of the issue is that romance novels aren't considered sufficiently important to warrant book reviews in literary magazines.  I'd be interested in hearing some commentary on that point.

For a person who doesn't do much advertising, marketing, or social media, I commend Laura Moore for her loyal audience and prolific output.  Of course, it isn't surprising, given how  she writes in such engaging and absorbing manner, in many respects very old fashioned in its attention to detail and its strict adherence to recreating a story and characters you can fully invest in.  For Laura Moore and her readers it is about loving passionately, fulfilling your dreams, and finding healing in a world that often challenges and humbles you when you least expect it.

In other words, if you want a reading experience that draws you in completely and makes you tell your family and friends to leave you alone, because you are very busy, look for books by Laura Moore.

For more information on this book, please see the link below: