"THE WOLF GIFT" BY ANNE RICE! BEING A WEREWOLF IS BETTER THAN SEX! 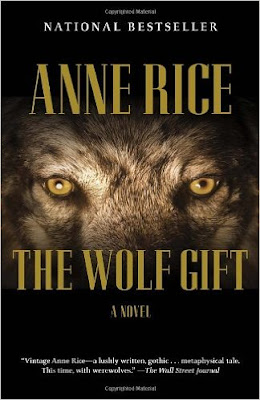 "The Wolf Gift" is the first Anne Rice book I've ever read, which is pretty disgraceful since she started her writing career in the 70s. I should be thoroughly familiar with her work by now since the 70s was my decade.

I do recall I tried to read her books when the movie "Interview With a Vampire" came out in the 1990s, but I found that they have a Stephen King type intensity to them which I feel uncomfortable with.  The horror is too horrible for me even to contemplate, so I just toss it to the side. I much prefer the garden variety type vampires and werewolves such as you will find in The Twilight Series by Stephanie Meyer or The Shiver Trilogy by Maggie Stiefvater.  Yes, bottom line, I'm a sissy.  I admit it.

So, on to the story.

"The Wolf Gift" is about Reuben Golding, a young journalist in his early 20s who goes on assignment for the San Francisco Observer to investigate a secluded mansion right on the coast of Northern California.  Reuben, who is independently wealthy and often called "Sunshine Boy" or "Baby Boy" instead of his real name, quickly falls in love with the mansion and its beautiful owner, the mysterious older woman Marchent Nideck.

Within a short timeframe, Marchent has seduced Reuben, but the next morning she is murdered by two intruders who kill her and then seek to kill Reuben as well.  Before they can go any further, a wolflike monster appears on the scene, kills the attackers and bites Reuben.  Within weeks, Reuben transforms into a werewolf and sets about taking over the old mansion--conveniently Marchent willed it to him in the hours before her death!  He also ventures into the City like a marvel hero to right wrongs and deter evil doers, even to the point of ripping them to pieces limb to limb and crunching on their bones.

Will Reuben Golding be able to handle "The Wolf Gift" or will he succumb to its bestial pleasures?  Will forensic science expose Reuben to the scrutiny of the larger world?  What about the original group of men who previously lived in the Nideck mansion--will we find out the cause of their mysterious disappearance?  Will Reuben Golding be able to find happiness with the woman he loves, despite the dramatic changes in his life?  Read and find out!

Clearly, Anne Rice is a woman of considerable stature in the literary world and so any comments I make regarding her life and work are probably well known.  So I feel rather impudent to go over these details here.  But for those of you, like me, who have lived under a rock for the last 40 years or so, this is what you need to know.

Anne Rice was born in 1941 and initially named Howard after her father--I assume in the spirit of  Johnny Cash's "A Boy Named Sue".  She is a prolific writer of fantasy and horror novels, erotica, and Christian literature, and is most particularly well known for the novel, "Interview With a Vampire" and its sequels.

She was brought up with firm roots in the Catholic faith. Initially as a young woman, she rejected her faith, but then around 1998 she returned to the Church.  In 2010 she rejected it again, unwilling to accept its antigay agenda since her son, Christopher, is gay, along with many other concerns.

Anne Rice was married for 41 years to poet and sculptor Stan Rice until he died of brain cancer at the age of 60.  She also had a little girl, Michele, who died of leukemia at the age of 5.

Overall, she has written well over 30 novels, and has sold 100 million copies of her books.

Finally, she has been interviewed on Charlie Rose at least five times which I consider quite a respectable record!

As a piece of literature, "The Wolf Gift" has its strengths and weaknesses, and my experience of these is purely subjective, and so not really definitive.

With that said, Anne Rice does an extraordinary job of creating a wonderful sense of place when it comes to the Nideck mansion and its surrounding forrest of redwoods and view of the Pacific Ocean.

Her descriptions of werewolf life and Reuben's transformation into a werewolf are extremely well done and believable in their sensuality and detail. I think it is notable that Ms. Rice makes the transformation into a werewolf an extremely pleasurable experience on the level, or even greater, than that of sexual intercourse, rather than one involving extreme pain and suffering which has been the way writers have handled it up until now.  Good for her making this change. It's about time authors stopped trying to punish werewolves for their magical natures.

Overall, Anne Rice presents the life of a werewolf on an almost operatic, somewhat Wagnerian level.  Talking about living a narcissists dream of absolute power--through Anne's Rice's narrative, this is one you'll want to experience vicariously at least once in your life! Everything about the werewolf is oversized--his hearing, his appearance, his undertakings--everything.  The one vision that particularly sticks with me is the scene of Reuben as werewolf clinging to the tip of one of the highest Redwood trees surveying the world below as far as he can see--the Redwood forrest, the mansion and the Pacific Ocean and beyond.

On the other hand, if there is anything I have trouble with, I'd say it would be the scenes where Reuben in his werewolf form tears bad people apart limb to limb simply because he smells the evil in their souls.  Aside from the intensity of the descriptions, which, as I mentioned earlier, are really disturbing, bottom line I believe everyone is entitled to the due process of the law rather than summary judgment.

I also do not believe that evil is quite as pure as Anne Rice presents it, and I would think given her extensive religious background, this is a subtlety she would get.  I also believe that, even if you have killed for a good purpose, repeated and ongoing acts of murder are going to have an impact on personality.  As Anne Rice presents Reuben Golding, he is blithely indifferent to the consequences of his actions.  In fact, at the end of the novel, he appears to be the same "Baby Boy" that he was at the beginning of the novel, which is a problem.  This, along with a tendency to use careless and exaggerated writing, i.e. calling eyes "orbs" is a bit of an ouch.

Further, (and you may consider this trite) Reuben in his werewolf form goes after large game, kills it and eats it with relish.  In one scene, there was one large boar Anne Rice described as foraging for food for its family.  Reuben proceeds to kill and eat this boar and all the time I'm thinking, what about all the little baby boars?  Are they going to starve to death now they don't have their Mom or Dad getting food for them?  Out with the handkerchiefs!

Still, what we have in "The Wolf Gift" is a creative and original telling of the werewolf narrative and well worth reading.
Posted by Elizabeth A. Richter at 7:40 PM