SUMMER OF SLOAN BY ERIN L. SCHNEIDER: HEARTBREAK AND SUN! 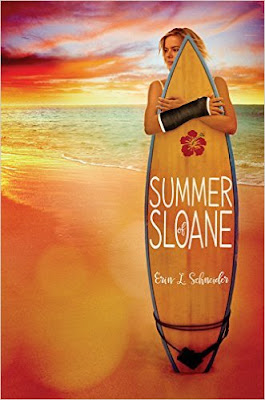 I heard about "Summer of Sloan" by Erin L. Schneider because my older daughter was looking for some summer reading at Barnes & Noble.  As she was looking, members of our local YA Writer's Group found out that she was in need of reading material and took a moment to recommend the book.  So this book comes highly recommended by Ms. Schneider's peers.  That is commendation indeed!

I think another attraction was the book's stand out orange cover with the main character, Sloan, standing at the beach in Hawaii holding onto a surf board while the sun sets behind her. I found that a quite striking cover.  For those who are interested, the jacket design was by Tyler Nevins who should be commended for a very fresh looking creative cover, and the photography of the girl on the front is by Michael Frost.  Even the bar code on the back of the book is in the shape of a surf board--real nice!

I like the choice for the blurb at the back of the book which starts with, "Come on, Sloan--live a little!"  As you read that opening sentence and continue on, you are likely to think oh no, not another scene where the guy pushes sex on the girl, oh gross, but if that's what you thought, you were wrong!  Of course, I'm not going to tell you what that's about--you've got to purchase the book yourself and find out!

I wish I could give you some good information about Erin L. Schneider, but sorry to say there isn't much out there to help with that.  From now on, as I've said, I think there should be a rule for all publishing companies that once a book is published the author must provide a three minute video for YouTube introducing themselves.  Of course, this is just me, and I'm intensely nosey and I always want all the juicy details about the authors of the books I read about.

Anyway, if you look at the author bio at the back of the book it says that Ms. Schneider lives in the Pacific Northwest and went to Hawaii Pacific University in Honolulu where she majored in International Business and Pre-law.  She spent 20 years in corporate merchandising and is now a full time writer.  She is married to husband, Neal, has a baby boy, Kellan, a dog and two cats.  Hopefully, it stops there, but between you and me, guys, watch out for the guinea pigs, the birds, and the geckos, etc.  If you are like me, you will stop at the snake!

For an interesting interview, take a look at this one with Erin Schneider at the link below:

The story begins with a shocker which pulls you right into the book and doesn't let go of you until you've finished it.

Sloane lives in Seattle with her divorced father.  Just before Sloane and her twin brother, Penn, head out for summer vacation with their Mom who lives in Hawaii, Sloane finds out that her best friend from childhood, Mick, had sex with her boyfriend Tyler, not once, but twice, which makes it even more serious.  What is worse, Mick announces that she is pregnant with Tyler's baby!

In response, Sloane drives home to confront Tyler and ends up giving him a mighty punch in the nose breaking it in three places, while at the same time injuring her own hand.  Of course, my immediate reaction to that is "that's a lawsuit" but no worries, this is fiction land!  Instead, Sloane jets off to Hawaii with a broken heart and her hand in a cast.

As the summer progresses, Sloane meets Finn, the handsome son of a local hotel magnate, whose cheerful exterior conceals a tragic history, and they begin a tender, bittersweet love affair.  Meanwhile, Sloane receives non-stop texts, emails, and letters from Mick and from Tyler back in Seattle begging for forgiveness and understanding.

Will Sloane come to terms with their betrayal and will she find a way to forgive and move on?  Read and find out!

Also, what about Sloane's Mom and Dad?  What about the secrets they have been holding onto for so long?  Again, read and find out!

Overall, I really enjoyed this book and found it very absorbing--the exotic locale added a fresh and unique backdrop to the story.  I totally approved of the cautionary scenes about the havoc that is the inevitable consequence of excessive alcohol consumption. Furthermore,I thought that Ms. Schneider handled the love scenes in a tasteful and thoughtful manner which emphasized that sex is an expression of the love and caring that two people have for one another.  We need more books for young people that handle sexuality in such a positive and healthy manner.

I am really looking forward to Ms. Schneider's next book, and so is my daughter!

For more information about this book, please click on the link below: