LISA JEWELL'S THE GIRLS IN THE GARDEN: THE DARK ROOTS OF DOMESTICITY EXPOSED! 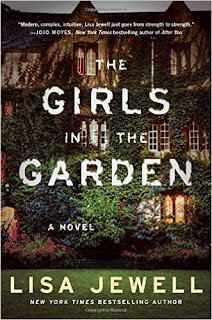 I have no idea how I ended up reading the book "The Girls in the Garden".  I suspect I discovered a mention of it in "People Magazine's" book review, a section that I read religiously every week, and was snagged by the description.  Look at how the book is billed: "dark secrets, a devastating mystery, and the games both children and adults play all swirl together in this gripping novel, packed with utterly believable characters and page-turning suspense."  I mean--who could resist that?

Here is a quick overview of the story.  Clare Wild, a single mother who just moved into the area with her two young daughters, has been out at a party with her next door neighbors, the Howe's.  She's gotten so drunk, she has to have her daughter, Pip, guide her home where she throws up and then goes immediately to bed.

While she is sleeping, Pip waits impatiently for her older, 13 year old sister, Grace. to come back to the house.  Apparently, Grace has been hanging out with her friends in the nearby Virginia Garden.  Eventually, after a few hours of waiting, Pip bravely ventures out of the house to find her sister.  Before long she discovers Grace unconscious, her face bloody, her shirt over her head and her knickers down.  In the subsequent investigation, everyone wants to know what happened.  Was Grace raped?  Was there a pedophile in their midst?  Was it a bullying incident carried out by neighborhood children gone dreadfully array?   Did it have some sinister connection to the death of another young girl that took place in the same location over a decade ago?

Read the story and find out!

Lisa Jewell is another one of those authors we know very little about because not much is posted online.  However, for those who still want the meager details, this is what we know. Lisa Jewell is the author of 15 books, approximately one a year since 1999.  She is a highly popular British author of chick lit who lives in London with her husband and two little girls.  She is in her late 40s and worked in fashion retail for many years before becoming a serious writer.

As the story goes, Lisa Jewell lost her job.  Then a friend dared her to write three chapters  of a novel in exchange for dinner at her favorite restaurant. According to Wiki, "those three chapters were eventually developed into Jewell's debut novel Ralph's Party, which then became the UK's bestselling debut novel in 1999."  In 2008, Ms. Jewell won the Melissa Nathan Award for Comedy Romance for her book, "31 Dream Street."

Just so you know, I am only now learning of the term "chick lit"; it makes me think of a room full of chickens running around.  So that's what us reading gals are all about--just a bunch of plump, squawking white birds milling all over the place.  Who would have thunk it?

Anyway, the book "The Girls in the Garden" was highly readable and, to be honest, I finished it in two days in between my various other obligations because it was so hard to put down.  I was eager to find out who had attacked the little girl in the present, and what had happened to the young girl those many years ago who died in the Garden.  I just had to keep on reading until I found out.  The ending is not what you expect, and very challenging, and one that I think worthy of considerable discussion once you are finished the book.

Lisa Jewell tells the story through the perspective of three of her characters:  Clare Wild, Pip Wild, and Adele Howe.  As the narrative slowly digs below the surface and explores all the layers of significance behind the various interactions among the characters, each person begins to understand that, after all, they do not truly understand or even know the people closest to them.  In addition, the characters go further to realize that they had not even understood themselves!  I particularly enjoyed the character of Pip, Clare's overly adult younger daughter who sees life with a wisdom that goes well beyond her years and outstrips that of the adults who surround her.

If there is any criticism I have, it is that I felt as though anyone who wasn't standard and run of the mill ended up getting a bad rap in this book.

For instance, Lisa Jewell adopts some very negative views on home schooling typical of the mainstream, swallowing without any critical thought the perspective that home schooling makes children weird, isolates them from other children, and stunts their social development.  In reality, in the modern day, many parents carry out home schooling within the context of other home schoolers, so there are many opportunities for socialization.

I also thought that the character of Grace and Pip's Dad, Chris Wild, as a paranoid schizophrenic who hears rats in the walls of his house and burns it down, was a bit exaggerated. Further, in contrast to Ms. Jewell's message, people do recover from schizophrenia and science has yet to discover new medications that can act as a silver bullet and solve the problem of serious mental illness.  On the other hand, here is a paranoid schizophrenic who is a film maker, who supports his family and actually has a family, a concept a great many people probably can't even conceive of.

Still, there was a subtle implication that no single woman, and certainly no children without a firm male hand, could possibly get along without a proper man around to protect and guide, and that's another false stereotype I don't buy into.

In other words,  this is one of those books that essentially enforces social and political conformity, and I speculate found approval in the publishing company for that reason.

Finally, this is a story of what children do among themselves when they are beyond the reach of their parent's vision.  In some ways, as "The Girls in the Garden" implies, what happens then is on the level of "Lord of the Flies" with the children essentially going native and sampling all the evils that human nature is subject to.

Likewise, as this is happening to their children, parents lose their own innocence again as they follow along watching their own children travel the perilous path from childhood to young adulthood.  In the same way that children must move forward, confront these issues and find their deeper, wiser, stronger selves to survive and achieve a mastery of their lives, so must their parents reprise again that very same journey vicariously through the experiences of their children.

Email ThisBlogThis!Share to TwitterShare to FacebookShare to Pinterest
Labels: CHICK LIT, COMING OF AGE, LISA JEWELL, PAGETURNER, SUSPENSE, THE GIRLS IN THE GARDEN